The plan revolved around running because that’s our passion. So the idea for a 12 hour run was just a natural thing to do. With the support of my wife and friends, I planned the day. I would begin at 11:00 am and run until 11:00 pm doing a 10.5 mile loop into Sunnybrook Park. I would return back to the starting point at the Second Cup at Bayview and York Mills every 2 hours to make it easy for anyone who wanted to participate. We were planning to do 6 loops (100km), so there was lots of time for people to come out and join in the fun. 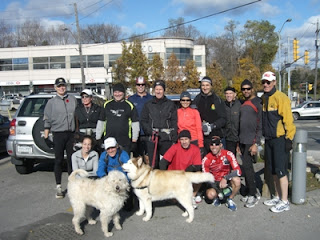 There were 14 of us to begin the day at 11:00 plus 2 dogs that had a blast. The second loop at 1:00 had 7 of us and 1 dog and the third loop began at 3:00 and had eight runners and a new dog. At 5:00 it was dark so this changed things up a bit. Headlights and flashlights came out but that didn’t scare anyone away. In fact, we had 7 runners out for both 5:00 and 7:00. The final loop at 9:00, began with just 2 of us and another joined in along the way. This was very special because they had both already run earlier in the day and came back out just to help me get it done!! 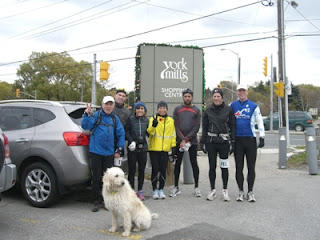 When I finally finished, I realized …hey, this is not really about me; it’s about all the others!

In summary, the run went great! No major issues from anyone. Over 30 runners and 3 dogs participated and considering the forecast, the weather was better than expected. I felt pretty good for most of the run but definitely realized that I could not have done as well without all the fantastic help and support from the group. 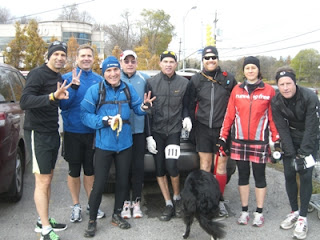 So, why running to Remember What’s Important…

I began adding this phrase to the end of my weekly emails to our group, The Ultimate Warriors, over a year ago and I’m still constantly being asked to explain what this means. However, it’s really for each person to decide for themselves.

For me, running just became a way to acknowledge so many things that I was fortunate enough to have in my life. After 6 surgeries in the last 6 years, I have become very appreciative of the fact that I can still be out there doing something that I love to do. My level of awareness, through running, has carried over into the rest of my life and most importantly, the people that are in it.

When I started running many years ago, I used to run to forget all the bad things… negative thoughts and feelings, stress, lousy days, failed relationships, etc… I know my focus changed dramatically after one of my many races, the Sunmart 50 miler in Texas, as I was already booked in to have my spine fused 3 days later. I finished the race then cried my eyes out as I didn’t know if I would ever be able to run again.

Then it really hit me and I started to think about what was truly important to me.

My second revelation happened after my wife Iris started running. At Seaton Trail 52K, I was struggling and Iris caught up to me. She could have easily gone on to pass me but chose to stay with me. She has since done this a couple more times in races like Haliburton 100M where she could have won outright but chose to stay with someone struggling. Knowing how talented and competitive she is and seeing this from her had a profound effect on me. I found it very inspiring to once again be reminded, through her, to remember what’s important.

Another life defining event happened last September 2010, when 10 of us decided to do the double crossing (R2R2R) of the Grand Canyon for Trailman's 60th birthday. We had talked about this for years and it was finally going to happen! This once in a lifetime experience was so far beyond our expectations ... so special, so breathtaking, so magical, so inspiring ... I know it left me speechless (a very hard thing to do). I think we all realized when we were done how incredibly lucky we were to have had the opportunity to share this unique and extraordinary adventure together.

They all touch, reach out to and involve other people!!

Yes, we all get caught up in the daily grind of our own personal lives. However we do not live in a vacuum. In some way, shape or form, we always need other people in our lives. We cannot survive without them. They should never be taken for granted. Never forget to appreciate, always take and make time for others, never forget to say thanks, always treat people with respect. There are always those who have less than we do, who are less fortunate than we are!

In summary, I ask …”when you look in the mirror, do you like what you see?”

ARE YOU READY TO RUN?

You DO have what it takes ... get out there and learn more about yourself!

TRAINING
Sweat, hard work & effort ... you only get out what you put in. That's what makes racing so much fun!

ATTITUDE
Believe in yourself and in your goals, as impossible as they may seem.